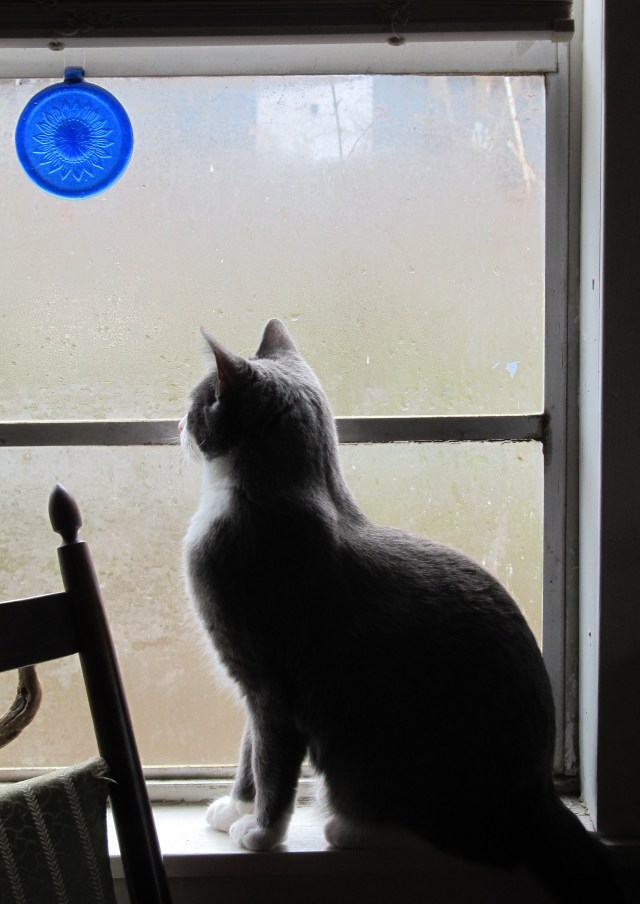 That’s the mood this morning.  This picture, the weather – it all fits.

The weather, writ large yet again.  Last night near Little Rock, a 4.7-magnitude earthquake. Last night here in Fayetteville, direct lightning-strikes.  A picture on FaceBook shows a big tree brought down in town.

Here he is at the beginning of the storm. 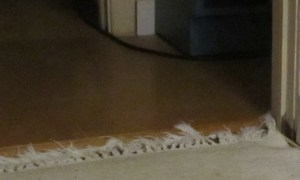 He ended up vanished.  (In the house, though.  Thankfully.)

And last night, while most of our species were watching the Oscars, I hung with PBS and the final episode of ANY HUMAN HEART.  This three-part series traced the arc of an English man’s life from youth, through World War II, to a lonely old age and the sadness of posthumous recognition . . . . featured standout encounters with Cruella DeVille Mrs. Simpson and viciously self-involved Edward VIII . . . I’m savoring the irony that as I write this, THE KING’S SPEECH and Colin Firth won Oscars – Albert George VI was Edward’s brother, who stepped up, after Edward abdicated, and redeemed the monarchy with courage and dedication in the dark days of the War . . . .

This is the signal-flag for “Oscar,” since I couldn’t find any free clipart for the Oscar statue.

In the PBS series, Jim Broadbent did a star turn as ever, in a performance filled with subtlety and feeling.  A piercingly bittersweet ending, an understated, but no less powerful, death.

I myself don’t want to go at all.  But when it does come as it must, I want to go like that.  On my feet.  Felled suddenly, while walking toward a vision of love.

And then I couldn’t sleep (no surprise there).  So I tuned into last week’s THIS AMERICAN LIFE podcast THE PARENT TRAP.  Then I really couldn’t sleep.

HUMAN HEART set the stage for the longer view of life.  And PARENT TRAP led me inexorably to a bitter, very sad reflection on the trajectory of my own life –

PARENT TRAP is about a grossly misguided social experiment involving Lucy, a baby chimpanzee.  Lucy was taken from her mother at days-old and “raised” – make that interfered-with, tampered-with, manipulated, and then abandoned when she became too much for her human “parents” to handle –

A human saint named Janis Carter followed Lucy to Africa.  Carter devoted years of her life there trying to ease Lucy’s situation but, in the end, Carter could go no further – and so Lucy was left on an island off Gambia, to live with her own kind, a bit longer, and then slaughtered by others of our kind – I just can’t stand to think of it.

The human who took Lucy from her mother, who tampered with her life in a ghastly social experiment, was a therapist – I pause to consider the irony – named Dr. Maurice Temerlin.

Not only did Temerlin perform this ghastly experiment on an innocent chimp, though.  His connection to my own life is that back in the 1970’s, he, along with Margaret Singer and Michael Langone of American Family Foundation, served on the American Psychological Association task force on cults.

The names are well known in my family.  My brothers and I were, at one time, all under the sway of the very cults that the American Family Foundation, and Langone and Singer, and Temerlin – and our own parents – were engaged in fighting.

So let my father make my point here, who used to say this, again and again:  Things are neither black nor white but shades of gray.

That’s to say, Temerlin could and did wreck the life of one innocent chimp-child – but he could also be of help in rescuing us human children.

It is a vow of mine, these days, to focus my attention on what connects me not to past suffering, but to life here and now, and to where I want it to go in the future to the extent that I have any say in the matter.

So I do not want to dwell on recreating the cult-years’ experience.  Let Allen Tate Wood say it for me.  Mr. Wood has written and lectured extensively on his own experience with the “emotional and psychological slaughter” that he suffered in “the abyss of religious fascism.”  Wood dedicates his website “to the thousands of young men and women whose . . . idealism and hunger for righteousness have been turned against them by cynical cult leaders. These parasites wantonly manipulate the openness, generosity and essential belief in goodness of their young followers.”

From this, you may discern the roots, in me, of the very serious objections I cherish against any form of certainty.  There are scars, dear readers, scars.

I want to retrieve this post with two bits of uplift:

When I think of the Lucy-Temerlin tragedy, I am awash in gratitude that we get to play with cats and dogs instead.  These divine beings have consented to live with us, on our terms – and they, unlike poor Lucy, are manageable in our homes.

Remembering past suffering deepens present gratitude.  Painful memories burnish present gratitude.  Give meaning to it.  Now, I am perhaps more shy than I would otherwise be, of taking present blessings for granted.  Don’t we all do that, from time to time.  But it is wonderful to feel that gratitude, so large, now.

And dear blogmates, the sun – at this very moment of writing – the sun has just come out. 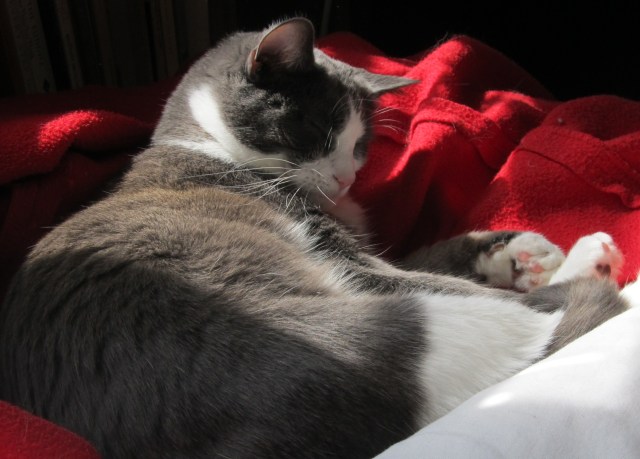 I would not lie to you about something like that.

Anita loves cats. This must be because she, too, has had nine lives. She’s been dancing since she could walk, she was a commercial artist and advertising producer, she earned a third-degree black belt in Aikido, she is a drummer with the Afrique Aya Dance Company, she is an attorney, and she’s a meditator and a devoted student of Nonviolent Communication. She also spent one lifetime sidelined with a devastating back injury in 1992. Since then – FELDENKRAIS METHOD® to the rescue. The FELDENKRAIS METHOD is all about dreaming concretely – thinking intelligently and independently by way of a gracious and kind physicality. The work affords all who study it a process by which to reach, with movement, into the mind and the heart, to make nine lives into one whole being.
View all posts by nadbugs →
This entry was posted in Empathy, Philosophy-Psychology, Pictures and tagged Allen Tate Wood, American Family Foundation, Any Human Heart, chimpanzee, Colin Firth, cult, Edward VIII, George VI, Janis Carter, Jim Broadbent, King's Speech, Lucy, Margaret Singer, Maurice Temerlin, Michael Langone, Mrs. Simpson, Oscar, Parent Trap, PBS, Radio Lab, This American Life, thought reform. Bookmark the permalink.