A Sole For Marty 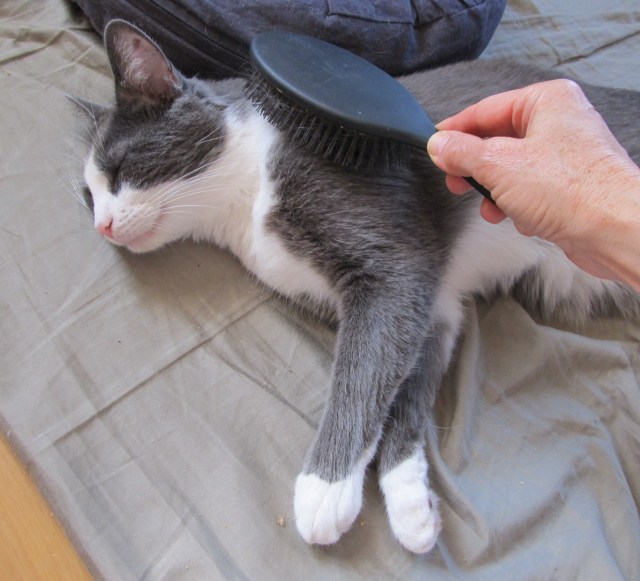 I begin this post, and I end it, with Bugs.  Through him, you and I connect.  Through him, through other beings like him in our lives, we share – I’ll come right out and say it – Love.

The flavor of Love I’m experiencing right now is grief.  I want to tell you about it.  It’s a story that’s unfolded over a relatively short time, just over the past week.  It’ll take more than a moment of your time, so if that’s all you got, scroll down, enjoy the pictures at the end, and let’s meet again in happier times.

Bugs is well.  It’s not Bugs.  Here is what happened.

The next day after Bugs’s Awful Frog incident, look who showed up.  Bugs was asleep at the time, so this guy was for me personally.  I was washing dishes.  Up pops this guy over the sill.

Mr. Fergus Fowler, of the Arkansas Fowler Toads.  Propped up on his forearms.  Dropped by for a little chat in the neighborhood.

I recalled that after the Awful Frog incident, blogmate 4Cats had wondered what message Frog could be carrying.  It seemed an important question.  Two frogs, one right after the other – one for Bugs, and Fergus just for me.  Posing for the camera.  He even waited while I ran to the other room to get it.

The next day, I was at the hospital working FELDENKRAIS with a friend who’s been in a deep coma.  In that session, I had the feeling that she suddenly responded where, before, she had not.

Later that day, she began talking.  For the first time since the trauma.

To celebrate, to thank them for their contribution, I sent a note to several FELDENKRAIS teachers who have inspired me.  Here is a copy of that note.  “FI” stands for FUNCTIONAL INTEGRATION (the version of the FELDENKRAIS work that is hands-on):

“Monday was the third FI I did with a friend of mine who’s been in a deep coma for over six weeks now, from an old traumatic brain injury, a relapse, surgery, and subsequent encephalitis.   At Monday’s session, I was pretty sure, especially after working with her jaw, that she was responding with a tiny bit of voluntary movement.  Plus, I believe, some eye contact.  Earlier today – Tuesday – her husband called me, incoherent with excitement:  Today she spoke for the first time.

“I myself know that it’s impossible to tell which of many factors contributed to my friend’s insanely wonderful breakthrough.  In any case, I wanted to share it with you.   Writing this, I feel myself on the point of tears when I think of how much gratitude I feel toward you, my very dear teachers and colleagues.  I only know that I have felt deeply, deeply grateful that you all have contributed so much to my well-being.  And now, it seems, to others’!”

One of the teachers to whom I sent this note was a guy named Marty Weiner.  Marty immediately wrote back, with a sweet and happy note.

Immediately after that, I got word that Marty had killed himself.

In the Jewish tradition, when you mention the name of those who have departed, you say “Marty Weiner; zichrono l’bracha.”  “Marty Weiner; remembering him is a blessing.”

So I want to talk about the blessing that is Marty’s memory to me.

About two years ago, after I studied with him in New York, I wrote an endorsement for him.  Here’s what I said then:

“I have studied with other senior FELDENKRAIS practitioners whose technical skills were refined and elegant.  The way some of them worked with me was educated – but it was not inviting.  I did not get the sense that they saw me as a full human being.  Marty saw me in the way I wanted to be seen.  He saw my limitations, and he also saw my longing to grow beyond them.  He encouraged me.  I felt a greatly enhanced confidence and freedom to explore.  And he did all this without laying a hand on me.”

One more memory of Marty’s teaching style.  We were gathered together in an undistinguished, nondescript room in New York.  He was saying to us something like:  “We go through our lives being in rooms like this one, asking, hey, can you show me the way to Manhattan?  The skyline, the bright lights?  Well hello?  We ARE in Manhattan!  Just walk out the door.  Manhattan!”

Now Marty’s walked out the door.

This morning something was bugging me, some pebble or other I thought, something stuck to the bottom of my foot.  I kicked off my Croc and looked at my foot.  Nothing.  I looked inside my Croc.  Nothing.  I carried on.  Still there.  I repeated the process.

Eventually it dawned on me to turn the Croc over, and look at the bottom.  I found a small tack, sticking straight in, but not far enough to puncture the skin.

Let this be my memory of Marty, then.  Marty, who had so much, who gave so much, who knew movement, and change, and growth, who knew how, so freely, to offer the means to reach for it.

I want the meaning of this incomprehensible moment to reveal itself.  I want to make use of it, in some meaningful way – to embrace it, to know it, to hold it with a sense of expansiveness, rather than contraction.

For now, I plan on saving the tack, as a memento mori.  As an intervention, between the sole and the piercing through.

The punctures on the top of the Croc are Bugs’s contribution. 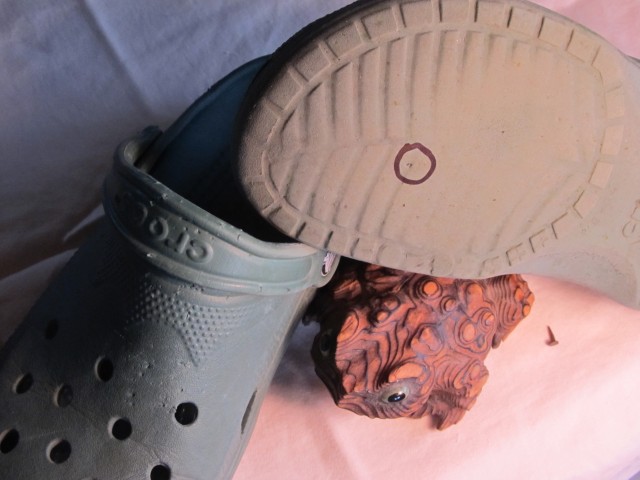 In a final interview, days before he took his life, Marty spoke of looking at art, of the feeling that can emerge, in the observer, from the art.  So the person looking at the art could say:  If I could create art, that’s what I’d make.

Let’s us do that with Bugs.  If we could create art, this is what we’d make. 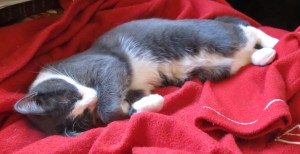 Anita loves cats. This must be because she, too, has had nine lives. She’s been dancing since she could walk, she was a commercial artist and advertising producer, she earned a third-degree black belt in Aikido, she is a drummer with the Afrique Aya Dance Company, she is an attorney, and she’s a meditator and a devoted student of Nonviolent Communication. She also spent one lifetime sidelined with a devastating back injury in 1992. Since then – FELDENKRAIS METHOD® to the rescue. The FELDENKRAIS METHOD is all about dreaming concretely – thinking intelligently and independently by way of a gracious and kind physicality. The work affords all who study it a process by which to reach, with movement, into the mind and the heart, to make nine lives into one whole being.
View all posts by nadbugs →
This entry was posted in Empathy, Feldenkrais, Pictures. Bookmark the permalink.

18 Responses to A Sole For Marty