Body-Wrap Bites The Big One

The great teacher Temple Grandin – you may have heard of her? she’s professor of animal science and brilliant thinker.  She’s figured out ways to ease the plight of autistic people, herself included.  She’s discovered that being surrounded by deep-touch pressure eases symptoms of autism, such as intolerance to being touched.  She calls her invention the “squeeze machine.”

The Tellington Touch “body-wrap” technique reminds me of Grandin’s thinking.  TTouch practitioner Barbara Janelle likens it to a “giant hug.”

For a couple of weeks, Teresa and I have been trying a half-body-wrap on Bugs.  Both for the above “big-hug” principle and, also, because we’re thinking about getting him into a harness.  Just to expand our options, to explore some wider repertoire, maybe working up to putting a leash on the boy and getting him outside a little – always wanting him to have a bigger life than just in the house.

Here he is modeling our version.

At first he was so undone by this weirdness, he flopped over and started rolling around like an egg, ass-over-teakettle.  It was a real strain for Teresa and me not to herniate ourselves laughing, because he was so cute it was pretty much unbearable.  We controlled ourselves, so’s not to hurt his feelings.  But it was not easy. 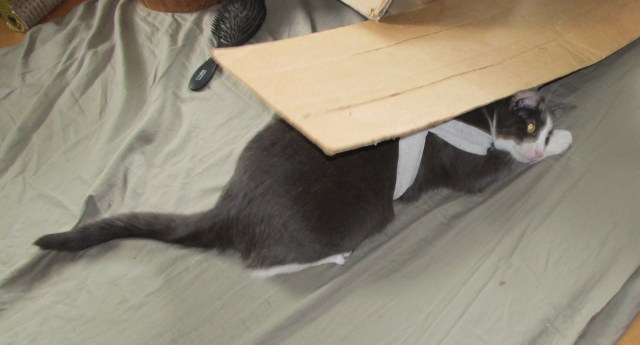 Now he’s getting quite used to the thing. Here he is play-hiding.

Here he’s doing something interesting and, I believe, extremely clever:  He’s giving himself the “as-if” sensation of walking, but he’s doing it on his side.

That exploration did not last.  Here he is “hiding,” preparing to pounce.

Here is the result. 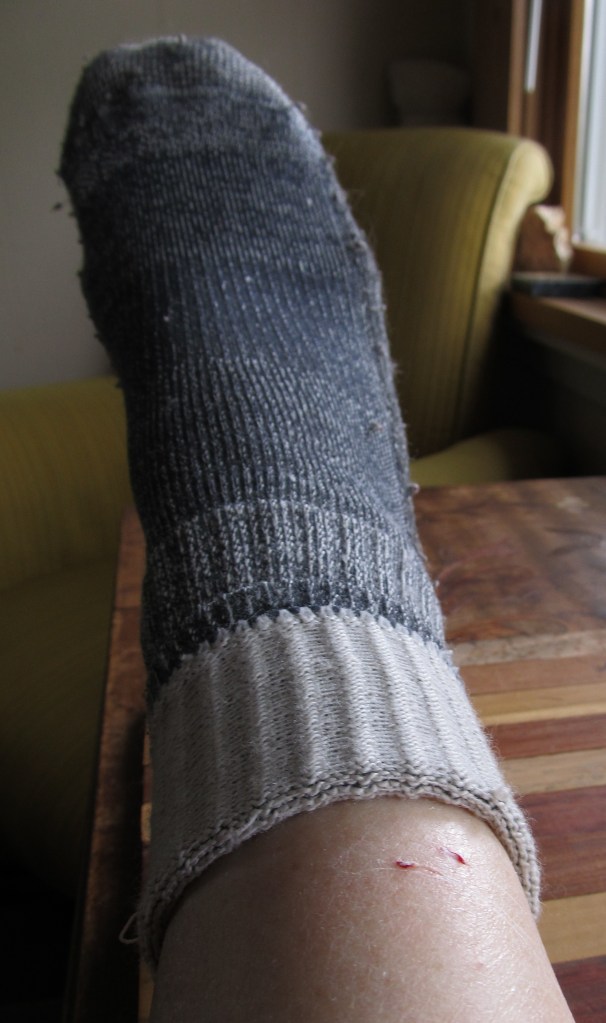 My theory is, I probably should have given him more space.  Maybe he was more upset by the storms than I thought.  He was a right cheesy bugger all that day.

Once the weather lightened up on us yesterday, though, he was positively hi-fructose-corn-syrup mellow-yellow-yummy-cat. 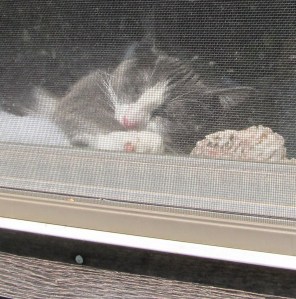 Anita loves cats. This must be because she, too, has had nine lives. She’s been dancing since she could walk, she was a commercial artist and advertising producer, she earned a third-degree black belt in Aikido, she is a drummer with the Afrique Aya Dance Company, she is an attorney, and she’s a meditator and a devoted student of Nonviolent Communication. She also spent one lifetime sidelined with a devastating back injury in 1992. Since then – FELDENKRAIS METHOD® to the rescue. The FELDENKRAIS METHOD is all about dreaming concretely – thinking intelligently and independently by way of a gracious and kind physicality. The work affords all who study it a process by which to reach, with movement, into the mind and the heart, to make nine lives into one whole being.
View all posts by nadbugs →
This entry was posted in Pictures, Tellington Touch, TTouch, Uncategorized and tagged Barbara Janelle, body wrap, cat, squeeze machine, Tellington Touch, Temple Grandin, TTouch. Bookmark the permalink.

6 Responses to Body-Wrap Bites The Big One