Early this morning there was another crash.  Bean was second on the scene.

Bugs checks out the third dimension from behind. 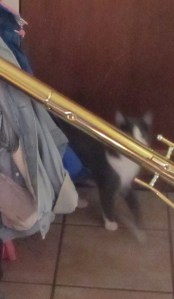 Gravity, it seemed, had prevailed. 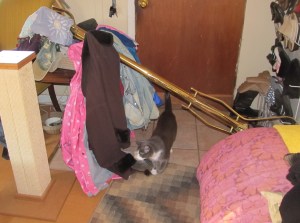 There was nothing to be done about it.

There may have been damage done to the wall.

Yes, there may have been.

Bean righted the situation as best achievable under the circumstances.  Bugs pondered them.

What is the true nature of gravity? 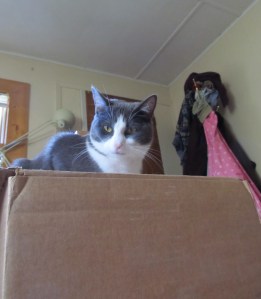 This passage in Newton’s memoires gave Bugs pause.  He found it strangely resonant, on the subject of Bean’s persistent inability to understand (understand Bugs?  Newton?  gravity?  strange attractors?  which?  we may never know):

“I do not know what I may appear to the world, but to myself I seem to have been only like a boy playing on the sea-shore, and diverting myself in now and then finding a smoother pebble or a prettier shell than ordinary, whilst the great ocean of truth lay all undiscovered before me.”

Bugs would like you all to know that the Royal Society has invited him to address the October 2011 Discussion Group.  If you’re in London then, do stop by.  The topic is:  “Emergent magnetic monopoles in frustrated magnetic systems.”

The thesis is, of course, self-evident.

Bean has little patience for any of this.  What she really wants to know is:

How about that Sir Isaac, for some kind of bodacious-looking dude?

Anita loves cats. This must be because she, too, has had nine lives. She’s been dancing since she could walk, she was a commercial artist and advertising producer, she earned a third-degree black belt in Aikido, she is a drummer with the Afrique Aya Dance Company, she is an attorney, and she’s a meditator and a devoted student of Nonviolent Communication. She also spent one lifetime sidelined with a devastating back injury in 1992. Since then – FELDENKRAIS METHOD® to the rescue. The FELDENKRAIS METHOD is all about dreaming concretely – thinking intelligently and independently by way of a gracious and kind physicality. The work affords all who study it a process by which to reach, with movement, into the mind and the heart, to make nine lives into one whole being.
View all posts by nadbugs →
This entry was posted in Philosophy-Psychology, Things Cats, Humans Do, Uncategorized and tagged frustrated systems, gravity, magnetic monopoles, Royal Society, Sir Isaac Newton, strange attractors. Bookmark the permalink.

13 Responses to Bugs Continues His Inquiry Into Strange Attractors