The world is an ambiguous place.  Here’s how I’m feeling about it. 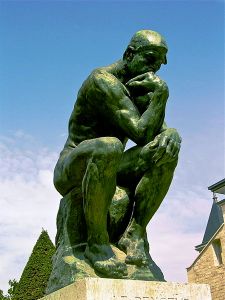 “The Thinker,” by Auguste Rodin.

An emblem of my childhood – the first impression at the Woodward entrance to the Detroit Art Institute.

The Thinker ponders what GM could possibly be doing at his feet down there.

I am confounded right along with him.  Let his body speak for me.  Words alone just aren’t doing it.

Three days ago Bugs and I were in a sunny place.  That day the post  was supposed to be “Bugs in The Pink.”

These days Bugs makes his points by regressing back to the squalling, biting, scratching. Maybe it’s the weather.  Yes, we still have weather worries and they are bad ones.  You may have heard about the Joplin tornado.

Joplin is where you turn off I-40 and head south for home.  Joplin is 45 minutes away from here. Friends went up there wanting to help.  They came back shell-shocked and crying.

Fergus could be to blame.  Fergus, of the Arkansas Fowlers. Two nights ago he turned back up.  At first we were thrilled and excited.  Here he is, as he first appeared.  Cute.

But remember the debate, last time, about whether Fergus would be good to eat? About who would prevail, in a smackdown between Fergus and Bugs?  This time Kim’s husband Brian helped us find the answer.  It would be Fergus.  He has the Borgia solution: Sticky white poison in glands on either side of his eyes.  Should any predator – Bugs, say – attempt to dine on Fergus, the poison would stick to the diner’s mouth and throat.  Diner would sicken and possibly die.  Read more – or since words aren’t doing it these days, have a listen to this baby’s warning cry.

Fergus the next morning, calmly reposing in his invincibility.  Here you can see his white patches.

Here he is later yesterday.  He sat in the same pose for so long, I thought he was on his way to dying.  No.  You can see him trying to get out of the sunlight.  You may not be able to see that his markings had faded and he looked more like the windowsill.

In case you were wondering, the sun was a one-day event.  It’s raining again now, as I write. Why would Fergus stick around for so long in the same place without moving a muscle?  Last night came the answer.

This shot documents the last moments of this poor moth’s life.

Bugs remained calm.  No doubt having studied on the white patches.  No doubt storing up all the aggro for later, to be vented on my own white-patchless person. 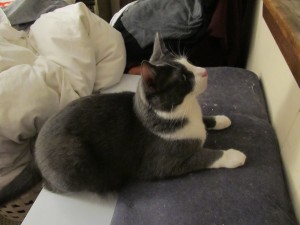 After this next encounter, though, I could not follow his example.  Seriously.  Look at the size of this — thing.  Beetle, I guess.  As in, the size of a VW.   Keep in mind that Fergus himself is about the length of my thumb.  Be amazed: 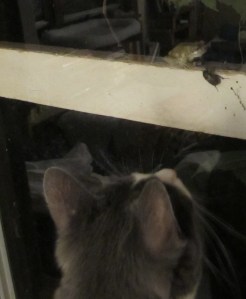 Too scary for all of us. 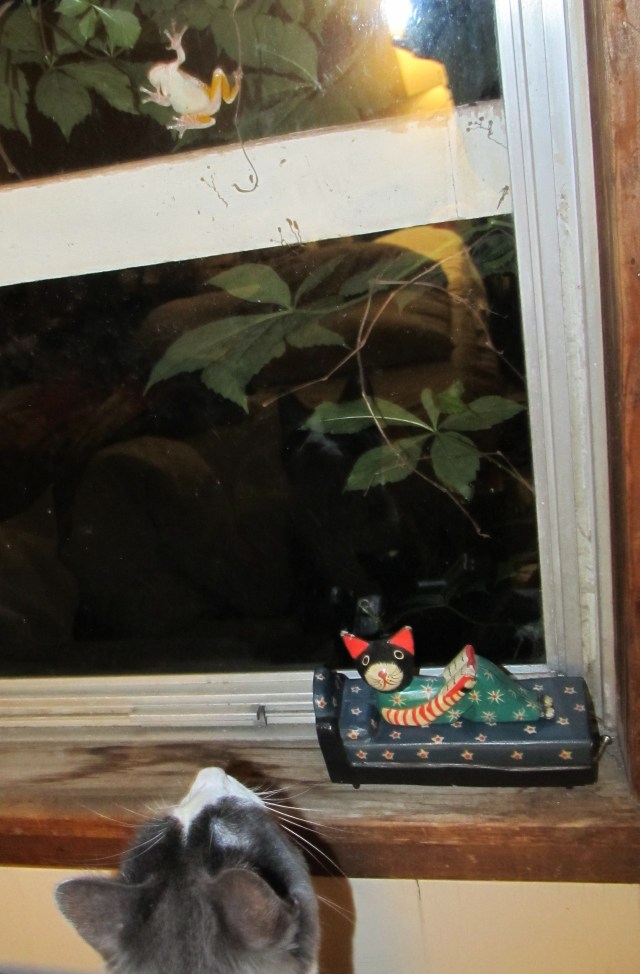 In the Questions You Never Knew You Had department, here is an explanation of the difference between frogs and toads — or, that is, no difference.  What an interesting life this is!

Anita loves cats. This must be because she, too, has had nine lives. She’s been dancing since she could walk, she was a commercial artist and advertising producer, she earned a third-degree black belt in Aikido, she is a drummer with the Afrique Aya Dance Company, she is an attorney, and she’s a meditator and a devoted student of Nonviolent Communication. She also spent one lifetime sidelined with a devastating back injury in 1992. Since then – FELDENKRAIS METHOD® to the rescue. The FELDENKRAIS METHOD is all about dreaming concretely – thinking intelligently and independently by way of a gracious and kind physicality. The work affords all who study it a process by which to reach, with movement, into the mind and the heart, to make nine lives into one whole being.
View all posts by nadbugs →
This entry was posted in Empathy, Humans Do, Pictures, Things Cats and tagged cats, difference between frogs and toads, Fowler's Toad, Joplin MO, tornado. Bookmark the permalink.