A funny thing happened, on the way to writing this post.  I decided I had to have an elderly gentleman named Gus.  I contacted Gus’s guardian and asked if Gus could be spared.  The answer came back “no.”  Humbug.

It was something about Gus’s face that did me in.  Have a look.

At the time I didn’t know why I should feel so moved at Gus’s little cat face – I just did.  Now I have the explanation.

Gus has a hard time communicating with his brother Julius and sister Calpurnia.  The guardian – on whose insights into all things feline I have come to rely – explains that it’s because Gus has a kink in his tail.  This makes it difficult or painful for Gus to carry his tail vertically, in order to express the proper “happy-handshake”-type message. 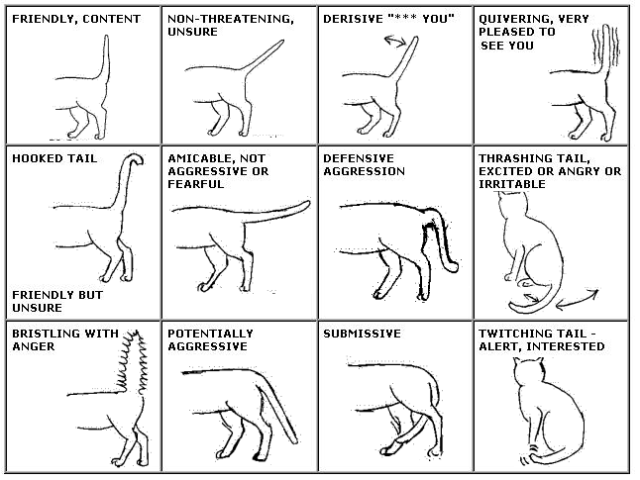 The guardian explains that the other cats misinterpret, and seem to be under the mistaken impression that Gus is – threatening!

I can totally relate.  As I said in my pee-mail over at Gus’s:  I have a kink in my tail too.  No wonder I look suspicious to everybody.

Pee Ess: Want to find out why we love Jackson Galaxy so much over here?  Check this out.  I believe Jackson pretty much agrees with the above schematic, on tail-posture — but here’s what makes the difference, to us, about lovely sweet cool Jackson:

“The bottom line here is to know the rules; then you can break them as you develop a deep individual bond with your pet . . . . A cat is born a cat, of course, but to a degree these communication skills must be honed, just like hunting. So, in short, this primer is just that; a way for you to begin looking at your cat a bit more deeply, while leaving other aspects of his or her world open to interpretation.”

Ahhhh Jackson.  If only the rest of the world were like you.

Anita loves cats. This must be because she, too, has had nine lives. She’s been dancing since she could walk, she was a commercial artist and advertising producer, she earned a third-degree black belt in Aikido, she is a drummer with the Afrique Aya Dance Company, she is an attorney, and she’s a meditator and a devoted student of Nonviolent Communication. She also spent one lifetime sidelined with a devastating back injury in 1992. Since then – FELDENKRAIS METHOD® to the rescue. The FELDENKRAIS METHOD is all about dreaming concretely – thinking intelligently and independently by way of a gracious and kind physicality. The work affords all who study it a process by which to reach, with movement, into the mind and the heart, to make nine lives into one whole being.
View all posts by nadbugs →
This entry was posted in Empathy, Things Cats, Humans Do and tagged cat tail, cats. Bookmark the permalink.