It’s taken us a while to feel accomplished enough to make this announcement, but here we are.  We have arrived. 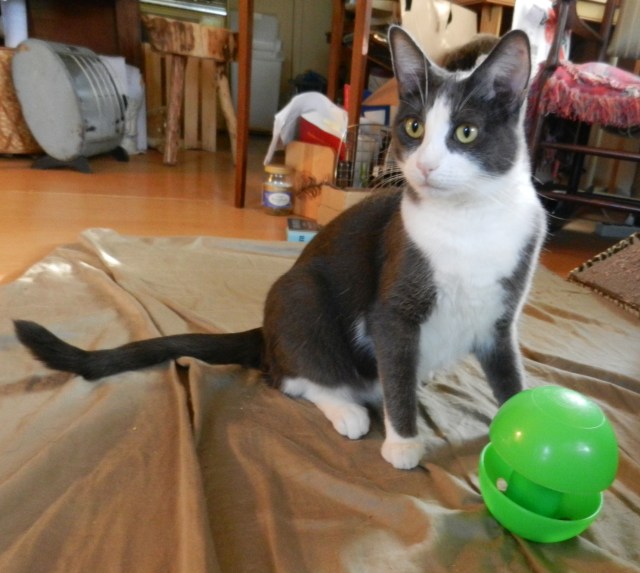 There is no-one else here to share this with.

What it’s all about.

I continue to ravage this thing even when I’m too tired to stand.  For I am —

[Editor’s Note:  This is a truly excellent, well-conceived and -designed forage toy, to help Mr. Bugs blow off his excessive predator-drive steam.  Believe your Editor.  She knows what she’s talking about here (unlike in that other embarrassing “pimples” episode).  It did take Bugs a while to learn how to use this, but, with kind additional directions from the manufacturer (who’s really accessible and cool on top of it and on top of that, from the Detroit area, go Tigers), Bugs did learn, and halleluyah for it.]

On this, Bugs bestows his Royal Seal of Approval.

[Here’s the link to the excellent Bat-A-Rat site.  Also see an informative article posted there about foraging, including ideas for making your own toy.  I would say, in addition to Bat-A-Rat — because this thing is so well-designed and thought-through.  All thanks to Cody and Ms. Caren Gittleman, Cody and Ms. Caren Gittleman, who first put us onto this great addition to the house.]

Anita loves cats. This must be because she, too, has had nine lives. She’s been dancing since she could walk, she was a commercial artist and advertising producer, she earned a third-degree black belt in Aikido, she is a drummer with the Afrique Aya Dance Company, she is an attorney, and she’s a meditator and a devoted student of Nonviolent Communication. She also spent one lifetime sidelined with a devastating back injury in 1992. Since then – FELDENKRAIS METHOD® to the rescue. The FELDENKRAIS METHOD is all about dreaming concretely – thinking intelligently and independently by way of a gracious and kind physicality. The work affords all who study it a process by which to reach, with movement, into the mind and the heart, to make nine lives into one whole being.
View all posts by nadbugs →
This entry was posted in Things Cats, Humans Do and tagged Bat-A-Rat, cats, foraging drive, mental stimulation, predator drive. Bookmark the permalink.

18 Responses to Bugs Bestows On Bat-A-Rat