Two days ago, Bugs and I paid a visit to Replacement Vet.  Now I am not happy.

I’m not happy with things in general, I admit.  In this case, though, I have special reasons to feel unhappy.  Let this picture demonstrate how I’m feeling right now.

Eight months ago Bugs and I visited Vet No. One for the second time.  This vet had initially treated him for ear-mites, but his ears still didn’t look right.  The vet responded by cleaning out his ears.  Again.  That’s it.

Bugs had that yeast thing – for a long, long time, dammit!  No wonder he wouldn’t let Teresa or me scritch his ears!  I can tell you, if I’m unlucky enough to get a yeast infection, and please Cod this should never happen to you, I am even more unhappy than I tend to be in the normal course.

So that’s the last visit we’ll be making to Vet No. One.  And many and sincere thanks to Replacement Vet for helping out with the ears.

But I am still not happy.  I let myself get buffaloed.  I went to Replacement Vet thinking that Bugs’s claws needed clipping and I didn’t want to take on that challenge yet, and Vet No. One never did get a current weight on Bugs so I wanted that too.  Plus a general wellness once-over.  And a meet-and-greet with a new vet, so we could get a relationship going.  That’s it.

And the rabies.  Oh by the way.  The rabies.

Replacement Vet insisted on vaccinating Bugs.  It was the law, she said darkly.  I caved.  So OK.  Now we’ve got the initial rabies series, and we’re compliant with the statute and Health Department regulations.  (Dammit, I checked.  After the fact, unfortunately.  Fortunately, Replacement Vet was right.)

So I’m grateful for the expert medical and legal care Replacement Vet gave us.

What I am not grateful for is the attitude that went along with it.

I think this vet let herself get triggered by, among other things, the raw-food diet I’m feeding Bugs.  Never mind she also acknowledged that Bugs was doing well, nice coat, so on.  I suspect the raw food may have been why I think this vet pegged me as one of those internet know-it-alls.  I’m really mad about her attitude to the diet thing, and I’m going to write about that next.

The vet responded to my worried questioning on vaccines by dragging in the autistic-child controversy.  She shared with me her fears and aggravation about anti-vaccine types who were exposing her child to risk, with their bad science and lack of understanding about things like herd-immunity.

I really resent that.

I really resent this vet responding to my taking notes – which I needed to do, given the surprise and confusion I was feeling – by saying she only had the time set aside for our appointment to deal with my questions.

But those “bad-science” anti-vaccine folks?  I can really, really understand that emotional reaction to the attitude these doctor-types dish up.  There’s no trust.  It’s just impossible for me to feel it, when I’m confronted with the irritable, irascible tone this vet took with me.

You know what?  I don’t need to be reminded that I didn’t go to vet school.  I have no illusions on that score.  I’m willing to defer to those who have knowledge and experience I don’t.  I can even muster up some empathy for what they must go through, on a daily basis, given humanity’s poor track record where animals are concerned.

Just:  Persuade me.  Don’t bludgeon me.

And I also don’t need reminding that the internet is full of confusing non- and dis- information, along with all the good data that’s also available out there.

Just:  Treat me with some respect.  As a member of the team.  We’re all pulling for Bugs’s well-being.  Right?  Right?

So I did my research.  After the fact, dammit.

I found in 2009 the State of Arkansas revisited the rabies issue.  Apparently a state representative had a gut feeling, when three of her dogs developed tumors and died, that over-vaccination may have been the cause.  The legislature considered joining many states that have gone from requiring rabies vaccination annually, to once every three years.  Arkansas’ approach now leaves the matter to the vet’s discretion, depending on the type of vaccine administered.

So I e-mailed asking which kind of vaccine Replacement Vet gave us.  She said she’s going with the annual re-vaccination, so I want to see why.  I’m going to take that information to Replacement Vet No. Two.  When I find that person, we are going to have us a little sit-down.  Without Bugs sitting there with my shoe between us for the sniff-factor, quivering with fear while I dithered in confusion.  I’ll pay for the bloody time.

I don’t like Bugs’s reaction to this rabies vaccine.  After, he was limping.  And the next morning, he threw up.  He’s only done that twice before, in the two years I’ve had him.  And yesterday, the second day after, he’s still way slowed-down.  He’s sleeping pretty much constantly.  Replacement Vet predicted this would happen.  OK.  It’s happening.

I don’t want any more rabies boosters.  I want to talk to Replacement Vet No. Two about whether the state will accept titers instead (a test to sketch in whether immunity is still there).  I’ve heard (not from Replacement Vet, needless to say) that the state might accept those, or they issue waivers for animals that have a reaction to vaccines.

In the meantime, here are some snaps of Bugs.  He’s recovering.  That’s what I’m telling myself.

After the pics, I supply some links if you want to research this vaccine issue for yourself.  I notice some disagreement, even between the Cornell source recommended by Replacement Vet, and what Replacement Vet herself recommended.  I see this is a tough thing.  There is no certainty, apparently. 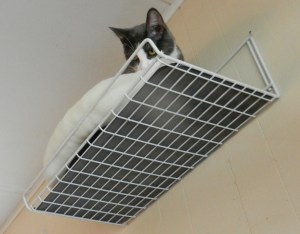 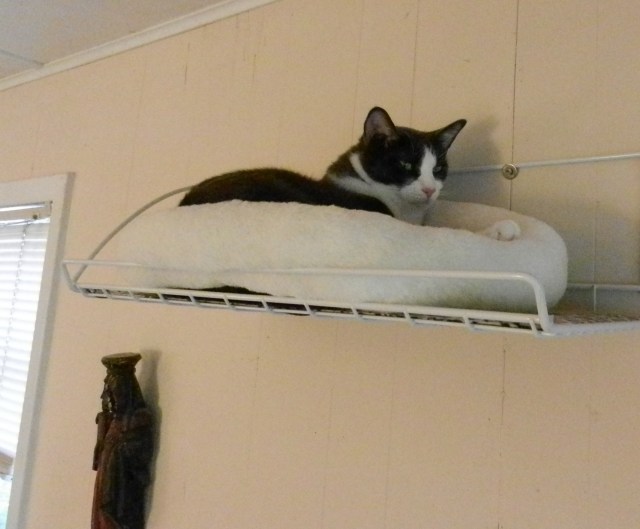 Anita loves cats. This must be because she, too, has had nine lives. She’s been dancing since she could walk, she was a commercial artist and advertising producer, she earned a third-degree black belt in Aikido, she is a drummer with the Afrique Aya Dance Company, she is an attorney, and she’s a meditator and a devoted student of Nonviolent Communication. She also spent one lifetime sidelined with a devastating back injury in 1992. Since then – FELDENKRAIS METHOD® to the rescue. The FELDENKRAIS METHOD is all about dreaming concretely – thinking intelligently and independently by way of a gracious and kind physicality. The work affords all who study it a process by which to reach, with movement, into the mind and the heart, to make nine lives into one whole being.
View all posts by nadbugs →
This entry was posted in Uncategorized and tagged autism vaccine controversy, cats, feline, herd immunity, immunization, internet know-it-alls, medicine, rabies, titer, vaccination, vet. Bookmark the permalink.