Last post but one, we left Bugs lifted-off into the stratosphere, Bean holding the leash and an empty cat-shaped jacket, and darkness fast approaching.  You’d have thought I would be hysterical.

Well – I probably was, but this time I couldn’t feel much. 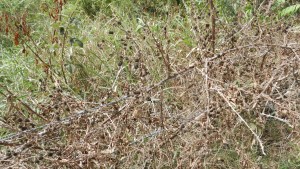 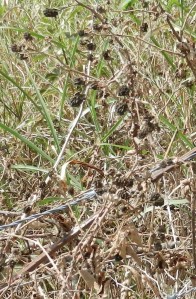 See those blackened blobs?  Blackberries ripen in mid-July, around here.  These were well on their way when they got zapped.  (We still haven’t had the rain we need.  It’s cool halleluyah – but still no rain.)  These are now crisp toasty fossils.

Losing Bugs this time, that was pretty much the way I felt.  Or, more accurately, not-felt.  Last time he escaped was way way worse – but this time was pretty bad too.

I threw the leash and jacket in the house and hopped in the car to get some stinky food.  I actually left the scene!  But what could I do?  I’d run out of stinky food.  Last time, only a plateful of fresh mackerel lured Bugsy back in.

So I was gone like ten minutes.  When I got back, I set out on foot calling him.  Hoping he’d do like last time and go under the house.  I called him at the East Hole.  No luck.  I walked around to the north.

And there he was.  He actually had his little white face stuck right outside the hole and he was meowing to beat the band.  “Over here ma!  I’m over here!”

I laid out the stinky food in a chain leading from the hole to me.

This time he had no interest in food whatsoever.

He expressed that by digging the stinky morsels under.

That is a sight I never will forget.  His little white paws, claws out, digging the stinky morsels under.

Then he pulled back in the hole and I could hear him meowing loudly under there.

I don’t know what inspired me to walk around to the East Hole.  I think it might may have been, “Well, maybe the North Hole wasn’t big enough to dig out from.  I know the East Hole is.  Let’s see if we can meet up there.”

It worked!  There he was.

I picked him up and in we went.

Here’s a compare-and-contrast.  (If you’ve got time to burn, you can find all the gory details about last time in November and December ’10 posts.)

Last time:  I begged Bugs to come back – and he walked away, looking at me over his shoulder and squalling.
This time:  He wanted me to help.  He called me.  He came toward me.

Last time:  Four hours, from escape to rescue.
This time:  Forty-five minutes tops and it’d have been quicker if I hadn’t left for food.

Last time:  I reached into the East Hole, to haul Bugs’s butt out.  He was concrete.  Rigid.  I’d have had to break something, to move him.
This time:  No biggie.  He was soft when I picked him up.

Last time:  Fresh mackerel was the heavy bribe.
This time:  No bribery needed.  Came out under his own steam.

And do you know, it’s been over a week and ever since then, this boy has been my little sugar-pie.  No claws, no grizzling, no stomping around – just head-butts, tail-wraps, purrs, sweetness & light.  Oh and biscuit-making too.  He just jumped up next to me and did that on my hip.  How could I forget biscuit-making?  Good suthrun cat that he is.  Me, I’m not from around here. 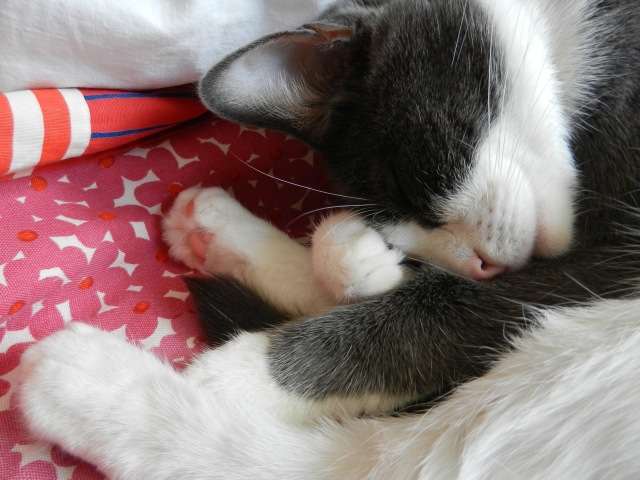 The blackberries were a small price to pay.

Editor’s Update:  We probably rushed this whole leash-training caper.  The New York Times just published more detail from Jackson Galaxy on how to do this.  This article presents a much different story, from what looked like a one-step deal on an episode of last season’s My Cat From Hell show. Apparently it took the Times writer months to get her cat onto the New York streets.  Even with Jackson’s help.  If you’re thinking about trying this, be sure to read all the comments to the article, too.  There’s much good information in them.

Anita loves cats. This must be because she, too, has had nine lives. She’s been dancing since she could walk, she was a commercial artist and advertising producer, she earned a third-degree black belt in Aikido, she is a drummer with the Afrique Aya Dance Company, she is an attorney, and she’s a meditator and a devoted student of Nonviolent Communication. She also spent one lifetime sidelined with a devastating back injury in 1992. Since then – FELDENKRAIS METHOD® to the rescue. The FELDENKRAIS METHOD is all about dreaming concretely – thinking intelligently and independently by way of a gracious and kind physicality. The work affords all who study it a process by which to reach, with movement, into the mind and the heart, to make nine lives into one whole being.
View all posts by nadbugs →
This entry was posted in Pictures, Things Cats, Humans Do and tagged cats, escape, harness, holster, jacket, Jackson Galaxy, leash, New York Times, rescue, walking cats. Bookmark the permalink.

12 Responses to Compare And Contrast