Please note my earlier memo on the subject of your shocking failure, in your apparently excellent art museum, to include any image of Cat over there.  I am sure you’re a busy person.  As I have not heard back from you yet, let this memo amend my previous one.

My human was so ashamed of her species, for failing and overlooking to include any homage to Cat, that she was uncharacteristically eager to follow my instructions.  I told her she would have to look further than Bentonville, Arkansas, if she was going to get anywhere with the project I require you to undertake.  So she went all the way to the Philbrook Museum in Tulsa, Oklahoma.

Unfortunately, she did not realize that there would be no American Art to be found, at an exhibition entitled “Two Centuries of European Masterworks.”  This lack of planning and forethought is what I have come to expect of her.  Never mind.  Please take the below image as just one of doubtless many examples of what you might find out there in the Art World, to fix your shocking failure. 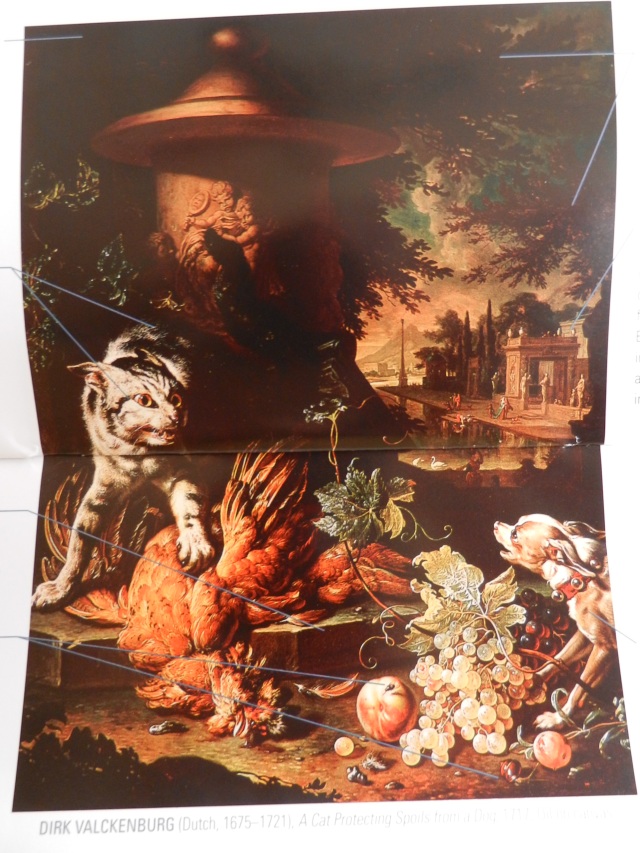 This Dutch guy Dirk Valckenburg has clearly learned how dangerous it can be to mess with Cat.  And he, a mere European, has known that from 1625-1721.  Surely there are some Americans out there who have learned the same lesson.  Even if they’ve had a little less time on the job.

Those blue lines?  They’re laser beams.  Humans think they’re pointing to instructional notes about how to interpret this picture.  Come on.  The picture needs no interpretation.  I Photoshopped them, to update the image into the modern era and also to drive home my point.

Do I make myself clear?

Anita loves cats. This must be because she, too, has had nine lives. She’s been dancing since she could walk, she was a commercial artist and advertising producer, she earned a third-degree black belt in Aikido, she is a drummer with the Afrique Aya Dance Company, she is an attorney, and she’s a meditator and a devoted student of Nonviolent Communication. She also spent one lifetime sidelined with a devastating back injury in 1992. Since then – FELDENKRAIS METHOD® to the rescue. The FELDENKRAIS METHOD is all about dreaming concretely – thinking intelligently and independently by way of a gracious and kind physicality. The work affords all who study it a process by which to reach, with movement, into the mind and the heart, to make nine lives into one whole being.
View all posts by nadbugs →
This entry was posted in Things Cats, Humans Do and tagged Alice Walton, art, Art museum, Bentonville Arkansas, cats, Crystal Bridges Museum of American Art, Dirk Valckenburg, Magnificent Vision, Philbrook Museum of Art, Tulsa. Bookmark the permalink.