Because I come from a long tradition of double-dyed pessimism-izing not to say doom-mongering, let me be true to my heritage.  Start where I come from.  Right up front, worry and angst.

I was intensely distressed to see how, at first, Trexie fought for breath.  On Sunday and Monday, every time I went into Base Camp he got so excited, his sniffles turned into terrible rasping convulsive heavings for air.  I bled for him.

And I couldn’t believe how aggressive he was in expressing his need for closeness.  Head-butts?  Head-rams more like it.  Smearing cat-snot all over me.  Cat-snot that was so dark in color, I feared it was bloody.

What looked like a small injury near his left eye puffed up the eye and turned it weepy.

So far he’s been sustained on dry food, the first ingredient of which is corn.  This has got him where he is today, for which I am profoundly grateful.  And now I’m pleased to be able to offer him something better.  Urgently.

Also a high priority is moving him off clay litter, to pine-pellets.  I dislike the clay, the fumes, the unfriendly heavy feel of it.

Worrying about Bugsy has also kept me busy.  For two days, he wouldn’t eat at all, or he only pecked.  He was scared and upset, this poor little cheeky guy so full of himself when things are normal.  Except one time when he turned into a rabid vampire-bat and flung himself on Base-Camp door.  Uttering that deep unearthly rowling that rendered him unrecognizable to this loving mama.

Liberal application of Jackson Galaxy’s Spirit Essence “Peacemaker” formulation helped a lot with that.  Like, instantly!

These two days have felt, well, kind of endless.  Even given no digestive upset, no litter-box problems, no all-night yodeling, no spraying – remember my heritage.  Endless, I tell you.

And now, a transition.  From fear and angst, to a more fair and balanced view.  More process-oriented.

This morning Trexie is much, much better.  His snot has gone from dark to clear.  I never thought I’d see the day when I’d be so glad to get clear cat-snot all over me.

But he’s a biter, friends.  Play-bite, oh sure – but he goes at it as enthusiastically as he pursues the ramming of heads.  We’re going to need to modulate the biting.

Teresa came and explained he was stir-crazy and the bitey was because he needed gobs of structured play-therapy.  Here’s what he looked like, after duly therapized by Teresa.

As for me, my attention needs to return to where it ought to be.  I have been up in the air, friends, and not in a good way.  Time to put feet down on solid ground again.

This morning Bugsy still wouldn’t eat, though, while I was in there with Trex.  But once I came out, he ate a little more than in prior days.  OK, live and learn.  Jackson’s advice to feed the cats near each other went out the window pretty much after the first meal.  Bugsy wouldn’t touch his food that way.  So I moved it back to his usual spot and he pecked.

This morning, though, we fed both cats treats near the door, with the door cracked a little.  Bugs was cautious and guarded – but he ate his treats.  Next mealtime I’ll try again with his actual dinner, putting it within shouting distance of the door but a little further away than before.

Trexie is a food-vacuum, so no issues there.  Bit by bit, I’m adding the high-supplement raw ground chicken and better kibble, every meal more of that and less of the dry corn stuff.

And we’ve read some blog-comments recommending applying perfume on all parties involved.  We’re going to try sage instead of perfume.  I’ll let you know how that goes.

And now, the morphing of the name.  Which, creative person that I am, I could not let stand at Trex or Trexie, cute as that may be.  I’m thinking:

“Duvay” as in down comforter.  Because, in paroxysms of affection, this little kitty flings himself all over top of me.  And because he’s warm.

“Fanga,” into “Fang,” given the bitey.  I expect that will modulate when he gets out of Base Camp and has more scope to express his kitten-ness.  But the bitey is what was up this morning, pre-Teresa.

“Fanga” is the name of a rhythm, dance, and song.  Its meaning is generally acknowledged to be WELCOME : I wish you peace, and wellness, in the spirit that is of all things. 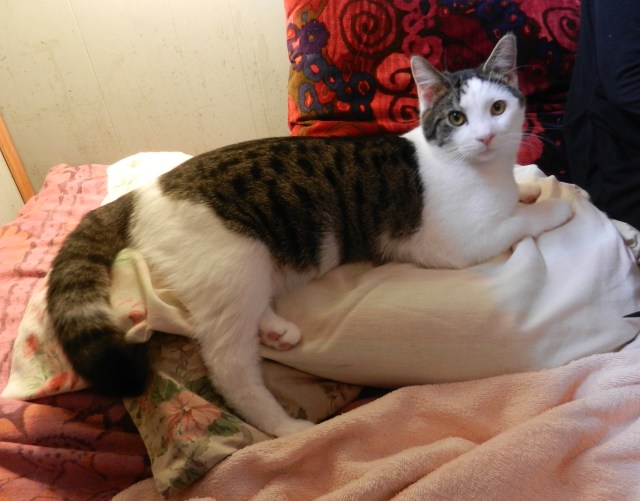 “Fanga” seems to be a song of the African diaspora.  Pearl Primus, American anthropologist and dancer, first popularized it in this country.  Some believe it may have been brought to, not from, Liberia, by American slaves who returned to Africa after emancipation.  It’s sung in Yoruba, possibly through Creole, or maybe in some other West African dialect altogether.  (This is what happens when you rip people from their homeland.  They, unlike I, become unsure where they came from.)

Anyway, here is “Fanga,” presented by the Debbie Allen dancers and drummers of Houston.

Welcome, dear little Fangie (name already morphing yet again).  The day will come, and may it be soon, when Bugsy will join me in singing this to you.

Do you think he’s saying:

Permit me to doubt.

Anita loves cats. This must be because she, too, has had nine lives. She’s been dancing since she could walk, she was a commercial artist and advertising producer, she earned a third-degree black belt in Aikido, she is a drummer with the Afrique Aya Dance Company, she is an attorney, and she’s a meditator and a devoted student of Nonviolent Communication. She also spent one lifetime sidelined with a devastating back injury in 1992. Since then – FELDENKRAIS METHOD® to the rescue. The FELDENKRAIS METHOD is all about dreaming concretely – thinking intelligently and independently by way of a gracious and kind physicality. The work affords all who study it a process by which to reach, with movement, into the mind and the heart, to make nine lives into one whole being.
View all posts by nadbugs →
This entry was posted in Things Cats, Humans Do and tagged cat, Fanga Alafiya, introducing new cat, Jackson Galaxy, Liberia, Pearl Primus, Spirit Essences. Bookmark the permalink.

31 Responses to How’s It Going?