All Really Is Well

It’s come to my attention that I might like to balance yesterday’s post with what’s true today.  So let me intersperse text and pictures in a quick one here, and then get back to the boys (and work).

Item:  Fangie’s nasal discharge continues to improve steadily.  Now the gouts of stuff when he sneezes have gone; he just sneezes only occasionally and there’s a little drippiness, that’s all.  His breathing is chuffy when he’s excited, but I believe that’s normal for him, given his health history. 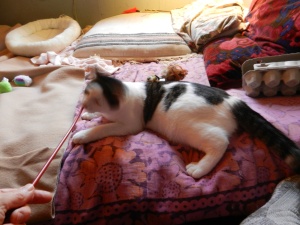 Item:  The bitey really does appear to be related to the need for him to blow off steam.  After all, he’s had a long journey no matter how cool he was with it, he’s doubtless missing Chrystal and his old home and playmates, he’s confined to a small room even if it is stocked with every convenience I could think of to put in there, and I’m dividing my time between him and Bugs and work – and this blog, so I need to make this post a short one – and the more time I can spend in play with him, the less he bites. 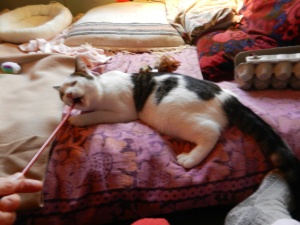 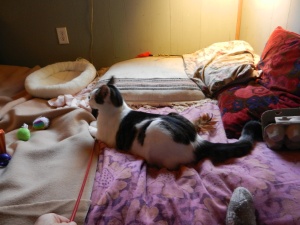 Item:  He really, really wants to explore the territory.  This morning he broke out of Base Camp as I was going in – so I put Bugs in Base Camp and let Fangie run around for half an hour.  No spraying, no yowling, no destruction from either party – just Fangie scampering around the new territory in his cheerful Fangie fashion (and eating the food I had down for Bugs, which Bugs had only pecked-at). 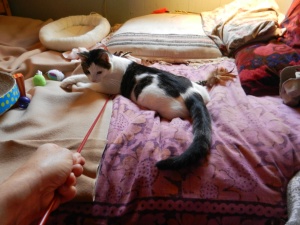 Item:  Bugs is still teetery and jumpy, and still won’t eat, and hisses from time to time at Base Camp door. 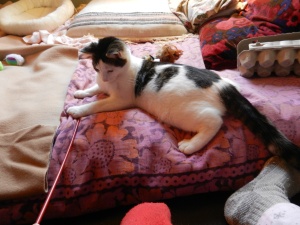 Item:  Bean is hanging in there.

So, friends, all is well in the household.  As well as can be expected. 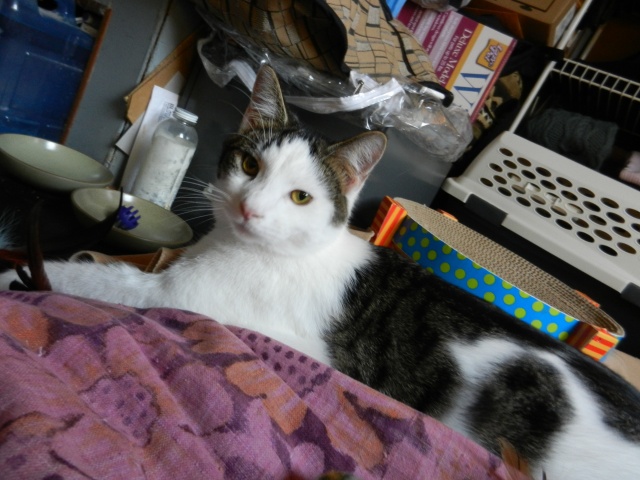 Anita loves cats. This must be because she, too, has had nine lives. She’s been dancing since she could walk, she was a commercial artist and advertising producer, she earned a third-degree black belt in Aikido, she is a drummer with the Afrique Aya Dance Company, she is an attorney, and she’s a meditator and a devoted student of Nonviolent Communication. She also spent one lifetime sidelined with a devastating back injury in 1992. Since then – FELDENKRAIS METHOD® to the rescue. The FELDENKRAIS METHOD is all about dreaming concretely – thinking intelligently and independently by way of a gracious and kind physicality. The work affords all who study it a process by which to reach, with movement, into the mind and the heart, to make nine lives into one whole being.
View all posts by nadbugs →
This entry was posted in Things Cats, Humans Do and tagged cats, introducing new cat. Bookmark the permalink.

16 Responses to All Really Is Well