Ready For Our Close Up

I have lots more words for you, dear readers, rumbling around somewhere in the laundry-cycle —

But who has the patience to attend the slow left-brain loggorthingy.  As it grinds its tedious thicket-y way to the white light of consciousness.

And here’s an archive shot, with a littler Bugs before he became famous. 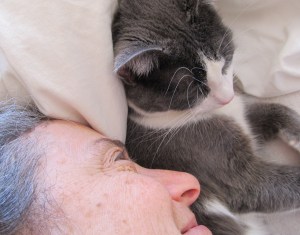 Hopefully our moment in the spotlight will end more happily  than Norma Desmond‘s . . .

Though I think I could live quite well with her Isotta-Fraschini.

Anita loves cats. This must be because she, too, has had nine lives. She’s been dancing since she could walk, she was a commercial artist and advertising producer, she earned a third-degree black belt in Aikido, she is a drummer with the Afrique Aya Dance Company, she is an attorney, and she’s a meditator and a devoted student of Nonviolent Communication. She also spent one lifetime sidelined with a devastating back injury in 1992. Since then – FELDENKRAIS METHOD® to the rescue. The FELDENKRAIS METHOD is all about dreaming concretely – thinking intelligently and independently by way of a gracious and kind physicality. The work affords all who study it a process by which to reach, with movement, into the mind and the heart, to make nine lives into one whole being.
View all posts by nadbugs →
This entry was posted in Pictures and tagged Cecil B. DeMille, humor, Isotta-Fraschini, movie star, Sunset Boulevard. Bookmark the permalink.

18 Responses to Ready For Our Close Up