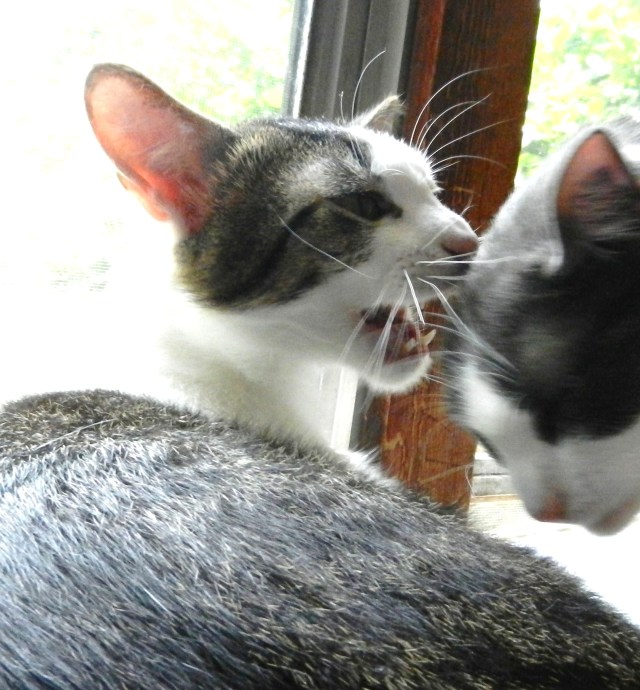 . . . but this afternoon, after hurtling around bouncing off the walls like maniac balloons with the knot untied, spilling my water and scratching the heck out of my ankle in passing – and with no bribery on my part whatsoever – the boys shook themselves out like this:

Play may even have been possible. 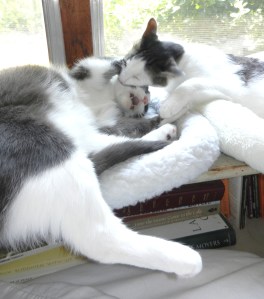 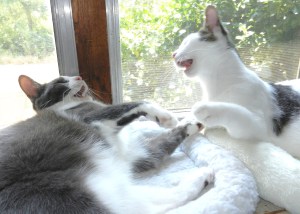 Wait.  What were we fighting about now?

Anita loves cats. This must be because she, too, has had nine lives. She’s been dancing since she could walk, she was a commercial artist and advertising producer, she earned a third-degree black belt in Aikido, she is a drummer with the Afrique Aya Dance Company, she is an attorney, and she’s a meditator and a devoted student of Nonviolent Communication. She also spent one lifetime sidelined with a devastating back injury in 1992. Since then – FELDENKRAIS METHOD® to the rescue. The FELDENKRAIS METHOD is all about dreaming concretely – thinking intelligently and independently by way of a gracious and kind physicality. The work affords all who study it a process by which to reach, with movement, into the mind and the heart, to make nine lives into one whole being.
View all posts by nadbugs →
This entry was posted in Pictures and tagged battle of the beds, cats. Bookmark the permalink.

8 Responses to Beds: A Gentler Note