Have You No Shame?

Recently blogger friends Cats & Co. and Here There Be Spiders posted about why they love cats.  Check out what they say, and be moved.  House of Carnivores says she trusts her animals.  “They have my back.  And they are the caretakers of my heart.”  As for me:

I love cats because they have no shame.

Just look at a representative sampling of life around here, one busy day last week.

Where is the shame?  In lying draped around the premises all day, like an off-shoulder feather boa in a Masterpiece Theater costume drama? 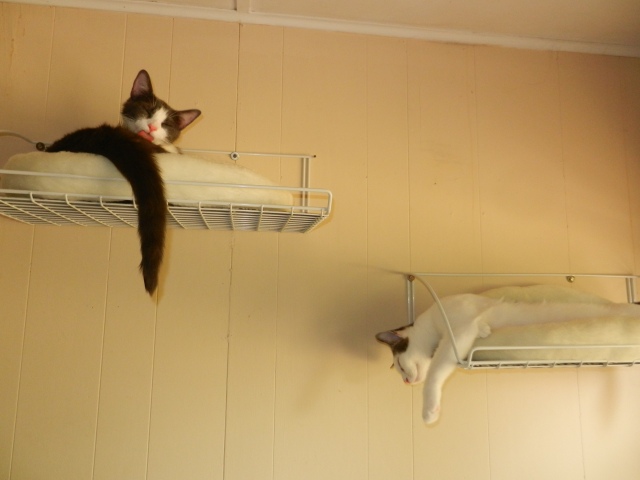 Working just that minuscule bit to keep things tidy on the person?  Otherwise shedding all over and creating other even-less-palatable busywork for the human Bean permitted to share the premises?

Where is the sense of responsibility?  Do you not have to work for love?  Become worthy of it?  Certainly not be born into it, deserving of it because one simply is?  No?

No.  I’m not seeing this in my cats.  You may see shame in a dog, poor darling tail between legs.  A cat?  I don’t think so.

Maybe our own species, present company excepted, does its mighty best to instill in cats a sense of shame, treating them unfeelingly because the autonomy of cats is resented, maybe it’d be thought good to inflict one’s frustration on these born-beautiful beings –

– but I don’t recall seeing a cat willing to take delivery on the special kind of torment that is shame.  Cats may respond to criticism with resentment back atcha, or aggression, or they become just plain people-averse – a strategy with which I myself, frankly, sympathize in large part.  But have you seen a cat beaten-down and humiliated and miserable and crawling and submissive?  Not so much.  Cats are proud beings.  They fight, or they do become distressed rightly so more’s the pity, or they become terrified of this all-too-human mess and they simply slither away.

I admire that in them.  I myself have stood still for, and suffered from, the poisonous lash that is shame, the boiling battery-acid toxicity of it all – but up until recently, I do believe I thought, mistakenly, that the way out of that nightmare was to craft myself into a being that would do just about anything to deny it.

The trouble with that is, you pretty much have to beat down all feeling, all sign of sensible life except rage or despair maybe.  And people who are really successful at beating down sensible feeling are, apparently, psychopaths.  They have lost their humanity.  They have been shocked and shamed right out of their minds and hearts, and so they become capable of anything.

So this, after all, may be the key to what ails those people as extreme examples, and our society as a whole and in general.  We lack insight into shame’s corrosiveness.  We do not know how to practice, with ourselves and each other, shame’s antidote, which is empathy, which is the healing anti-venom of understanding.  Empathy designed to restore, within the shamed, a sense of healthy and realistic self-worth.

And I’m not talking about the mean, greedy, self-fascinated narcissism that is the order of the day on the other side of this coin.  I mean a healthy and realistic self-worth, one that’s grounded in an understanding of solidarity, connection, and a sense of one’s own, and of contributing to each others’, well-being.

Just look around.  How much of that do you see out there in the public “discourse”?  What I see out there is overwhelming disapproval and blame and judgment and criticism –

– and more of us in lockdown to deny shame, or locked-in to inflicting shame and cruelty and punishment on other beings of any given species.  Or running like hell while praying like mad.  Good luck with that last one.  Don’t look back.  They’re gaining.

Here’s what I love:

Anita loves cats. This must be because she, too, has had nine lives. She’s been dancing since she could walk, she was a commercial artist and advertising producer, she earned a third-degree black belt in Aikido, she is a drummer with the Afrique Aya Dance Company, she is an attorney, and she’s a meditator and a devoted student of Nonviolent Communication. She also spent one lifetime sidelined with a devastating back injury in 1992. Since then – FELDENKRAIS METHOD® to the rescue. The FELDENKRAIS METHOD is all about dreaming concretely – thinking intelligently and independently by way of a gracious and kind physicality. The work affords all who study it a process by which to reach, with movement, into the mind and the heart, to make nine lives into one whole being.
View all posts by nadbugs →
This entry was posted in Empathy, Kindness, Philosophy-Psychology, Things Cats, Humans Do and tagged empathy, Exponential growth, Health, Shame, ted, Vulnerability. Bookmark the permalink.

28 Responses to Have You No Shame?