This was my unconscious shaking its booty, busily working away on a mixed-up mess of input.  Trust me, it really does all make sense – and I think it has a lot to say about what’s wrong with the world and what we can do about it.  Or, more probably, what we can “not-do” about it.

The elements in my dream derive from my:

*  Background trauma of the Holocaust
*  Historical training in t’ai chi
*  Current practice in the FELDENKRAIS METHOD®
*  Current experience of empathy through Nonviolent Communication
*  Current practice in biofeedback through Les Fehmi’s Open Focus
*  Watching INSIDE JOB, a supremely lucid explication of the financial crash.  (Yes, I did say sustaining and supportive.  Welcome to my world.)

As I said.  Chased by Nazis.  I turned my back on my pursuers and began to execute the t’ai chi posture of Squatting Single Whip.  This is one among many, if not all, t’ai chi postures that completely elude me.  After all, my joints are not Chinese.  Here’s Squatting Single Whip, done by Professor Cheng Man-ch’ing.  The picture comes from T’ai Chi Ch’uan, the cover of which claims it’s a “simplified method of calisthenics for health & self defense.”  I don’t know about the “simplified” part.  Anyway.  My point.

I suddenly had the feeling that a very calm and peaceful man was glued right up behind me, doing the same movement, totally supporting my back.  He and I were moving as one.

A heavenly feeling of love and power washed over me.

I awoke to find Bugs and Barney pressed against my back as we all slept together.  A picture of this cat-cluster will have to wait for a dawn that earlier breaks than it does now.   Let these pictures stand in until then. 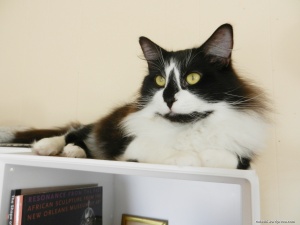 So – here we have a visitation from old, old anxieties – and fight-flight defenses against them.  How to persuade those defenses to relax their grip?  So I can find another way toward freedom, toward finding my own way?  It’s a real dilemma.  These defenses are so stubborn and entrenched, sometimes it seems that they really need to get whopped upside the head for them to yield.

On the other hand, they are there for good reason.  This, it seems to me, is reason enough to respect them.  I prefer an approach that persuades them away gently, with a more coherent and considered and empathetic approach.  By the “soft power” of understanding.  By which understanding, the old ways can be retired.

At least it’s been that way for me.

By “soft power,” I don’t mean narcissistic buzz that zaps the synapses.  I mean the feeling of lightness and warmth and peace that comes from empathy and understanding.  The “givingness” of that feeling.  The gratitude.  The expansive generosity of it.

So maybe this is the meaning of my dream.

It’s not just Nazis.  When I try to understand the 2008 financial crash, I get a similar feeling of baffled, disbelieving terror.  How was it possible that so many people could behave in a manner that seemed nothing short of insane?  When, after the crash, the insanity was so blindingly obvious?

It’s less difficult to imagine being led astray by blandishments, given how powerful the longing must be to raise one’s kids in a nice house no matter how financially unlikely.  But what must it have taken to achieve the cynicism necessary to have been a banker, a trader, a ratings agent?  That imaginative a feat I simply could not pull off.

But the movie I watched the night I had my dream – INSIDE JOB – made clear that the end destination was by no means necessarily obvious in the beginning, in the ‘80’s.  With success, and more power and power and power, the ruling narrative became so invincible, only a very few could see the truth of it at all.  A few guys – and gals, I’m glad to say – did see it, and tried to warn of it.  But the iron fist of power and denial was wielded against them, with all the intractable force of our anxiety-defenses, and these prophets were marginalized.  Or worse.

And for the major players, it seemed to be a matter of hard, narrow focus, on only one’s own bottom line.  What do I care if this debt will default?  I can sell it quick, before that, and keep the fees.  I can even bet the debt will fail, and I can profit even more.  I and mine will be more, and we will be well. And that is all that matters.

So.  I have a pretty good hunch that the feeling of understanding I got from the movie contributed to my good dream.  It seems that the ability to understand, for me, is my avenue into “soft power.”  Not fight or flight fueled by rampant anxiety.  Just a witnessing, with deep and sober regret, that things have come to this.

With that understanding, my boys and I can sleep at night.  And that’s no small thing.

So on this cold rainy morning, I find peace of mind to contemplate the plum blossoms just outside my window — and I feel glad.  Even though the world is in such a state.

Maybe especially because it is so. 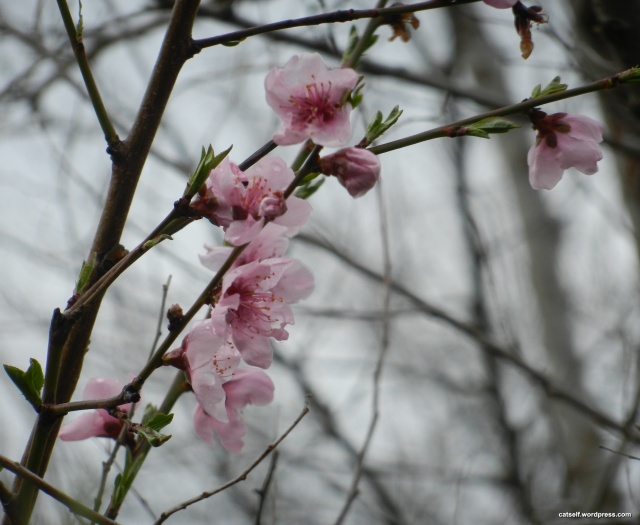 Anita loves cats. This must be because she, too, has had nine lives. She’s been dancing since she could walk, she was a commercial artist and advertising producer, she earned a third-degree black belt in Aikido, she is a drummer with the Afrique Aya Dance Company, she is an attorney, and she’s a meditator and a devoted student of Nonviolent Communication. She also spent one lifetime sidelined with a devastating back injury in 1992. Since then – FELDENKRAIS METHOD® to the rescue. The FELDENKRAIS METHOD is all about dreaming concretely – thinking intelligently and independently by way of a gracious and kind physicality. The work affords all who study it a process by which to reach, with movement, into the mind and the heart, to make nine lives into one whole being.
View all posts by nadbugs →
This entry was posted in Empathy, Feldenkrais, Kindness, Philosophy-Psychology, Uncategorized and tagged Aikido, Charles Ferguson, corruption of academe, deregulation, Feldenkrais, financial crash, Goldman Sachs, Holocaust, Inside Job, Les Fehmi, Nonviolent Communication, NVC, Open Focus, Professor Cheng Man-Ch'ing, Reaganism, Squatting Single Whip, t'ai chi. Bookmark the permalink.