The Blues. Before, During, Hopefully After.

Boy, I got ‘em and how. Here are two major elements:

* I am sorely missing my African drum and dance teacher Angelo. He is now in his home country of Côte d’Ivoire for a month, accompanied by students wealthy enough to join him. I am not there, thanks to money troubles among other reasons.

Back in 2005 and 2006, I took two of those trips. The first trip I owe thanks to a generous anonymous benefactor. The second trip was thanks to the mind-boggling disorganization of South African Airways during the first trip, which resulted in them giving three of us free passage for the second. The second trip was even worse than the first, transportation-wise, so I suppose I could have continued claiming another free trip indefinitely – but the screw-ups were so grueling, I lost heart.

Here’s a video a friend and I put together, from the first trip.

The video my friend posted is of Mamadou Diabaté, a genius balafon player from Burkina Faso. That’s near where Angelo and group are right now. This video shows the Africa I saw, in all its stunning beauty of spirit and music.

On Diabaté’s website, I found this, about the Sambla people of whom Diabaté is one:

“Jazz experts find the tonal system particularly interesting as it has close affinities with the ‘Blues’ pentatonic tunings.”

Yet Sambla music pre-dates the Blues.

Connections, undeniable. Ties and connections to Africa. Which we all share. Lest we forget.

And I am thinking of antidotes to the Blues.

Diabaté’s music. How it has come to me sunk in the Blues, from which it all came. Before the Blues, during, and, hopefully, after.

Of how I have just experienced another leap forward in my recovery from my foot injury, when, before this improvement, it seemed possible that I might limp in pain for the rest of my life.

Here are cats, followed by a link to the Diabaté video. Which please: Pause in your day, take time to watch and listen. I hope you enjoy. This is world-class. Blues, anti-Blues. 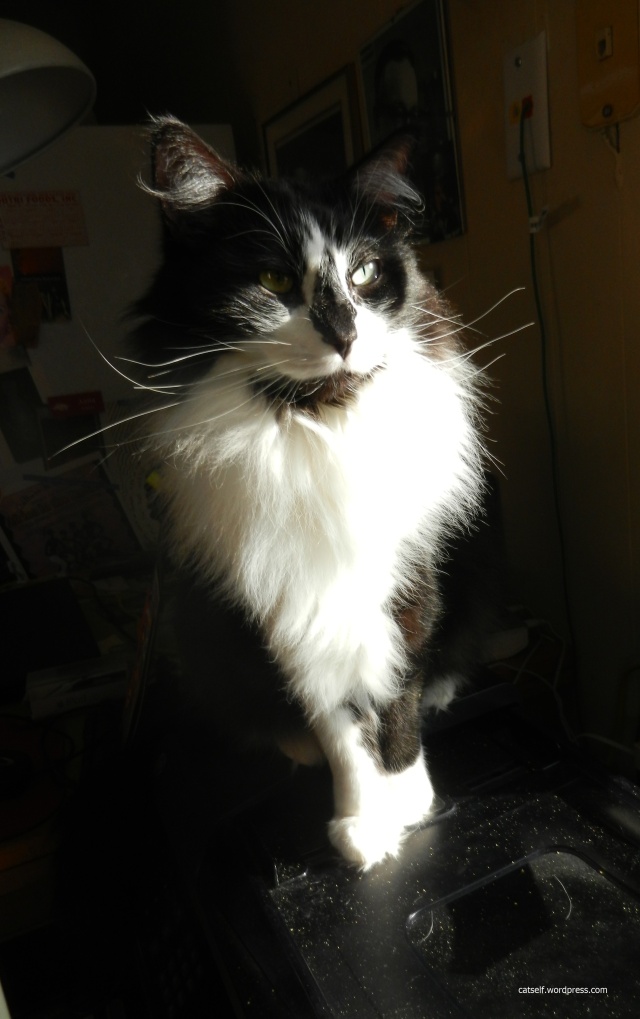 And now put your hands together for Mamadou Diabaté.

Anita loves cats. This must be because she, too, has had nine lives. She’s been dancing since she could walk, she was a commercial artist and advertising producer, she earned a third-degree black belt in Aikido, she is a drummer with the Afrique Aya Dance Company, she is an attorney, and she’s a meditator and a devoted student of Nonviolent Communication. She also spent one lifetime sidelined with a devastating back injury in 1992. Since then – FELDENKRAIS METHOD® to the rescue. The FELDENKRAIS METHOD is all about dreaming concretely – thinking intelligently and independently by way of a gracious and kind physicality. The work affords all who study it a process by which to reach, with movement, into the mind and the heart, to make nine lives into one whole being.
View all posts by nadbugs →
This entry was posted in Music, Uncategorized and tagged "Fenba", afrique aya, American health-care system, Angelo Yao, balafon, Burkina Faso, cats, Côte d’Ivoire, Mamadou Diabaté, Sambla, South African Airways, The Blues. Bookmark the permalink.

6 Responses to The Blues. Before, During, Hopefully After.