So after this latest escapade, we were back to the drawing board, vis-a-vis the jacket-leash idea.  My thinking is, no sense us trying to push the envelope to be courageous and explore calmly, when Bugs has his butt in a fluff about the jacket from the git-go.

The plan is to retreat inside and work both ends of the leash, to keep things as calm as possible.

So I realize — now I’ve chunked things this way back down — I was too ready to laugh.  Working with Bugs as slowly and attentively as I can each day, trying to acclimatize him by degrees, I see how really bothered he is about the jacket.

A week later, he’s still salamandering — though each day less so.  Still, after about five minutes tops, he just parks himself into a corner with his nose pressed up against something.  It seems reasonable to assume he’s shutting down.  Off goes the jacket for another day.

Except you can just never tell what the next day’s going to bring.  This morning we  finished our slow-and-easy jacket practice — and Bugs began caterwauling again.  I dragged myself away from the computer to see this guy, back again or another family member who looks just like the other guy: 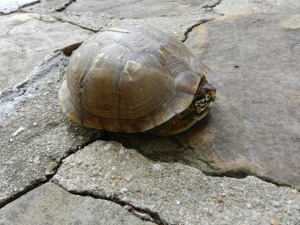 So I first spotted him in the weeds.  I thought what could be the harm in bringing Bugs out  for a meet-and-greet?  Mr. Turtle would know what to do, to protect himself . . . . So I popped Bugs back into the jacket and carried him out.

As I lowered Bugs down, though, he did that jump-straight-in-the-air thing.  Ah.  That was the harm. I’d forgotten about that.

Fortunately he leaped straight into my chest, so all I had to do was wrap my arms around him.  And when I did that, I noticed his heart was pretty much trying to get out of his chest.  So — back inside.

Then I brought Mr. Turtle up to the door. 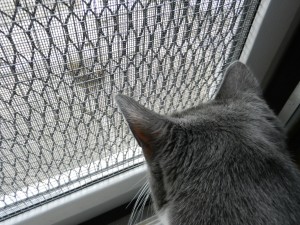 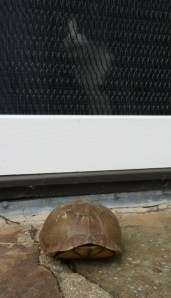 Did you know this kind of turtle has a hinge on their chest, so they can do this?  Did you know when they do this, there’s a little “whoof” of air?  Something so cartoon-like about this sound-effect.  Like they’re gasping.

I really wanted him to come out.  I waited a long time, camera in hand. 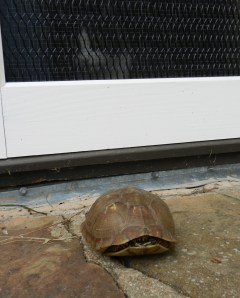 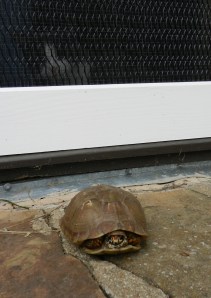 This was all the further he’d come out: 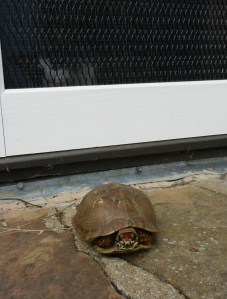 Can’t say I blame him.  What with Bugs freaking out behind him.  So I put Mr. Turtle back in the weeds, where Bugs couldn’t see him.

But Bugs was still caterwauling.  So I resorted to the nip. 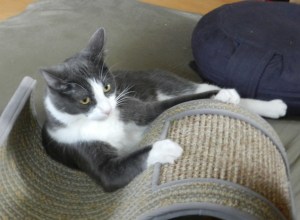 Bugs decides whether he’ll lower himself to the nip freak-out. 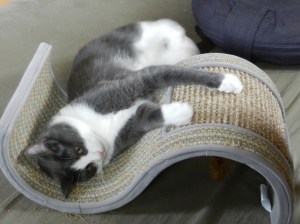 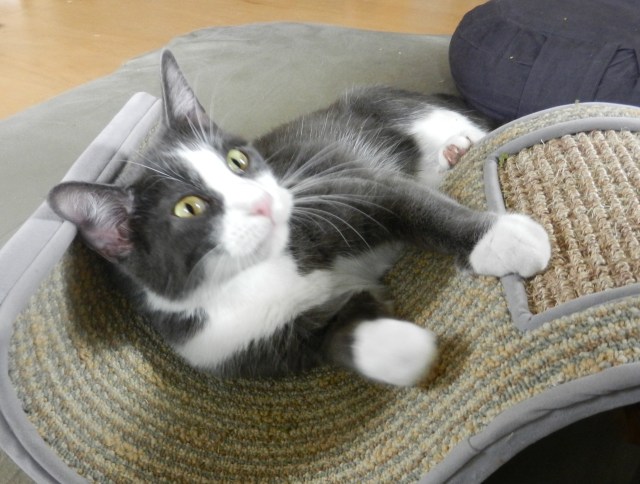 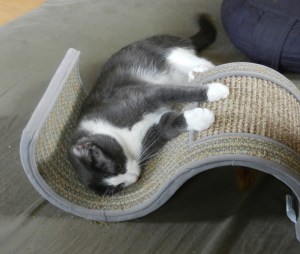 Going down — but two hours later, still not out.

Anita loves cats. This must be because she, too, has had nine lives. She’s been dancing since she could walk, she was a commercial artist and advertising producer, she earned a third-degree black belt in Aikido, she is a drummer with the Afrique Aya Dance Company, she is an attorney, and she’s a meditator and a devoted student of Nonviolent Communication. She also spent one lifetime sidelined with a devastating back injury in 1992. Since then – FELDENKRAIS METHOD® to the rescue. The FELDENKRAIS METHOD is all about dreaming concretely – thinking intelligently and independently by way of a gracious and kind physicality. The work affords all who study it a process by which to reach, with movement, into the mind and the heart, to make nine lives into one whole being.
View all posts by nadbugs →
This entry was posted in Pictures, Things Cats, Humans Do and tagged catnip, cats, ess, indoor cat, jacket, Kitty Holster, leash, turtles. Bookmark the permalink.