First up:  I am flat-out flabbergasted at Fangie’s high-octane jet-fueled play-mojo. Finally on Friday night I had a chunk of time to spend with him.  I was determined to go the distance.  I simply could not.  I went into Base Camp at 6:00.  Three solid hours later, with but one, I repeat one, five-minute break only – and I know regular readers may, with good reason, be skeptical about my powers of exaggeration, but this is the gospel, believe me, I timed it – he was still going hell for leather.  I simply caved.  I hadn’t eaten, I needed to use the facilities, and I was dropping-down-dishrag tired.  I fled the scene at 9:00.  I could hear him in there, still going at it, for another half-hour or so. 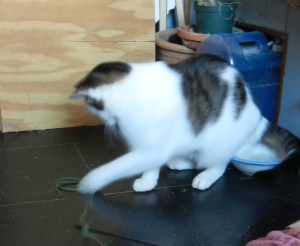 Never mind the expensive “Da Bird” toy – the string got chewed through in a jiffy, there was no interest whatsoever in the fancy feather feature – but the fishing-rod assembly and the improvised shoelace tied to it?  Kitty mojo heaven.

Saturday:  Rinse, spin, repeat.  Four hours on Saturday.  Four hours.  Have any of you ever tried to play with a kitty for four hours?  As Bast is my witness.

Sunday morning:  The dawn was greeted with a rousing call-response gospel-stomp.  Fangie took the castrato soprano voice, into the extreme upper registers, with something like scrreeeeerrrr wheeeerrrrr snick snick scrreeeeerrrr wheeeerrrrr, pause, repeat d.c. al fine.  Bugsy replied with his basso profundo interpretation of “Dixie” – he is, after all, a Suthrun confederate-gray cat – with the “look-away, look-away” portion of the chorus, downbeat on “look” and “awaaaay” held long and wide for the rest of the phrase.

So since they were showing such interest in each other, I thought I’d seize the moment and play trade-the-treat under the door.  I was so seized, however, I forgot I should not do that with Bugsy.  Poor sensitive little soul that he is, if he gets too excited over treats before breakfast, yak city is the result.  Duly yakked.  OK.  This, I felt, could be taken in stride.  You see how I’ve grown. 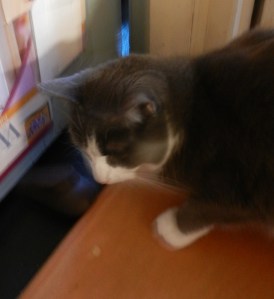 I know I yakked my treats.  That was then.  Where are they now? 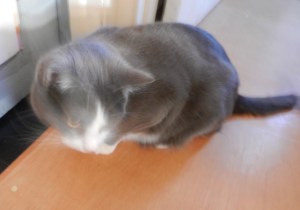 On the outside looking in. 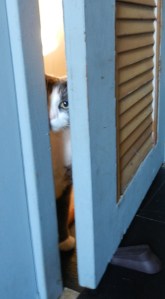 I smell something fishy. 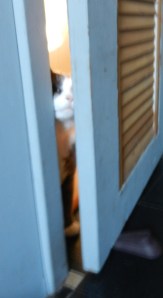 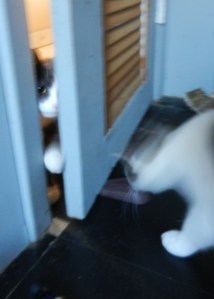 Get back here and answer the Paw of Doom. 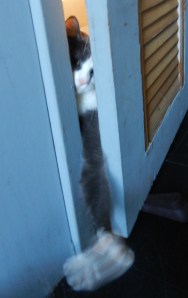 No dice.  Fangie’s no dummy. 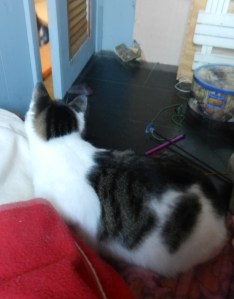 Why must we go through this?  I am just farklempt over here! 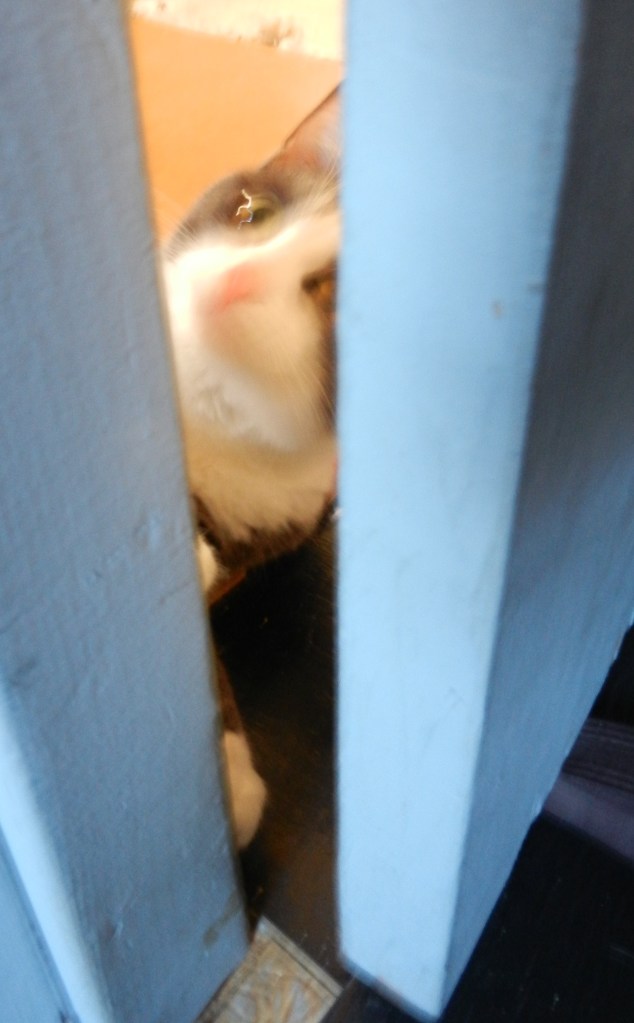 Editor’s Note:  Pedro seems to have captured Bugsy’s number, with this comment last post:  “I think this softer, sweeter side of Bugs might be just a bit of insecurity. That’s not always a bad thing, especially since he’s finding comfort in you instead of doing something destructive.”

And let us say, all together now, amen.  As the minutes tick by

Anita loves cats. This must be because she, too, has had nine lives. She’s been dancing since she could walk, she was a commercial artist and advertising producer, she earned a third-degree black belt in Aikido, she is a drummer with the Afrique Aya Dance Company, she is an attorney, and she’s a meditator and a devoted student of Nonviolent Communication. She also spent one lifetime sidelined with a devastating back injury in 1992. Since then – FELDENKRAIS METHOD® to the rescue. The FELDENKRAIS METHOD is all about dreaming concretely – thinking intelligently and independently by way of a gracious and kind physicality. The work affords all who study it a process by which to reach, with movement, into the mind and the heart, to make nine lives into one whole being.
View all posts by nadbugs →
This entry was posted in Things Cats, Humans Do, Uncategorized and tagged cats, humor, introducing new cat. Bookmark the permalink.

34 Responses to The Door Cracked Open